My interest in Wadokei of the Tokugawa era was ignited by my first visit to Japan in May 2011 and, in particular, a visit to the Watch and Clock Museum in Matsumoto. On returning to Scotland I bought a few books on the subject:  Japanese Clocks by N H M Mody, The Evolution of Clockwork by J Drummond Robertson (like me, a Scot), plus Dutch Clocks and their Japanese Connection by Ernest Edwardes.  As a precision mechanical design engineer by profession, and an amateur horologist by hobby, I became fascinated with the Japanese clock makers’ ingenuity of problem solving.  In particular, their approach to enabling mechanical clocks to tell temporal time (varying to match daylight through the seasons).

My research turned to the internet and I soon discovered the Bonhams Auction Catalogue of the John Read Collection of Fine Antique Japanese Timepieces.  It had been held almost one year to the day prior to my visit to the Matsumoto Museum.  This catalogue became my initial main reference source.  In March 2014 I had the pleasure of spending a day with John Read at his home in England.  My knowledge of wadokei was given a major boost with facts that he had gleaned during his 30 years in Tokyo working for Rolex and having the same fascination with wadokei as myself.  Some of John’s knowledge was only acquired after years of mutual trust and respect of Shinto monks at the Omi Jingu Shrine, Otsu, whose knowledge of these clocks had been passed down over the generations ….. and probably now much lost in the 21st century.  To John I owe much specialist understanding of wadokei – thank you.

I suffer, or probably more accurately benefit, from a remarkably high level of memory of facts and images but, conversely, a very poor level of instant recall. Accordingly I write everything down, initially in a booklet, but now transferred to this web page.

If others can benefit from my work then that is a bonus.

What started out as a retirement “once in a lifetime” visit to Japan, has developed into a further three visits.  Thank you to all who have helped me along this path of adventure.  An interest in wadokei clocks has provided me with a subject that I will continue researching for the rest of my life without ever reaching the end……….

“Since the early days of the Meiji era, it was worthy of notice that everything antique met destruction as it were.  I mean all clocks of yore, which guides the studies of development and evolution, have gone into the hands of foreigners, and I feel very sorry when I think of this fact.  Moreover I feel all the more miserable when I know that to look up the lineage of time-pieces methodically we are compelled to rely upon collections abroad.

Old clocks and other curios of value, which should be preserved, are, like old wood print pictures, fast disappearing from our country.

On the other hand there came a great earthquake and fire the 1st September, 1923, which ravaged the Kanto district, thereby rare collections owned by three or four of the well-known collectors have been mercilessly destroyed forever, and this calamity is really beyond our imagination.”

This book which catalogues his fine collection of clocks has become an important reference on Japanese Clocks.  I am proud to own copy No.158. 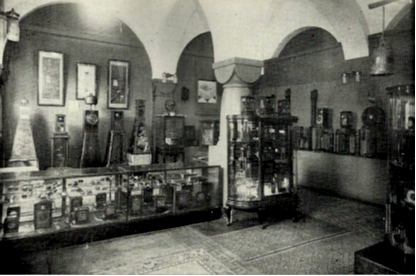 Mody’s collection was housed in a single room of the Oriental Hotel, Kobe, and was destroyed by US bombing of Japan in the Pacific War of 1941-45.