In the second half of the 18th century, Osaka was the seat of an important private academy of astronomy directed by Asada Goryu, who depended on Western astronomical sources of Sino-Jesuit origin.

When shogunate officials decided on a new revision of the calendar in 1795, they sought Asada Goryu’s help. He declined the offer in favour of his two most distinguished pupils, Takahashi Yoshitoki and Hazama Shigetomi. Takahashi, being a samurai, was appointed as official astronomer. Hazama, merely a rich merchant, was made an assistant. The new Kansei calendar was completed in 1797 and adopted in 1798. It represents the first Japanese calendar involving Western methods of observation and computation.

Takahashi’s son, Shibukawa Kagesuke, completed the last calendar reform before the Meiji restoration, the new Tempo calendar. It was finalised in 1841 and adopted in 1843 and was exclusively based on Western astronomy. During this time Shibukawa also completed a compendium describing the principals involved and the instruments used by Asada Goryu’s disciples when working on the Kansei calendar. This compendium, the Kansei rekisho, contains numerous illustrations of the different instruments used by Takahashi and Hazama for celestial observation and time measurement. It includes drawings of two weight-driven, pendulum-controlled timekeepers: a shaku-dokei style, and a dai-dokei style.

Only four exist in Japan today.

The first has a four-wheel train set between the front and back plates. The wheels have three spokes; the fourth wheel, or crown wheel, sits parallel to the rest of the wheels. The verge, which carries on its left end the crutch for the pendulum, is set horizontally across the crown wheel on a bridge attached to the top plate of the movement, perpendicular to the wheel arbors.

Such an arrangement allowed the maker to do away with a contrate wheel. The pendulum hangs from a silk loop attached to some sort of cock that can be turned back and forth for adjustment. On the right-hand side of the verge bridge there are two sharp pointers, the tips of which face each other. Most likely the lower pointer is pivoted and turns freely on the x-axis, possibly also on the z axis; this allows the pointers to function as levelling devices. There is no winding square, winding being accomplished on a small-diameter barrel by pulling on a counterweight. The driving weight has a long, threaded central shaft with a thin metal plate that can turn up and down.

This clock differs from the usual shaku-dokei clocks in that the florally engraved dial plate carries three separate round dials, each provided with a single hand. Since the numeration on the dials suggests that all hands turn in the same direction, one or two of those hands may be directly set on the end of the wheel arbors, with the remaining hand or hands attached to the arbors of motion wheels mounted between the front and the dial plates. Each of the three dials has ten equal divisions and at least twenty subdivisions, supporting Yamaguchi’s opinion that this or similar clocks were probably decimal timers. A decimal system would fit the Japanese division of the astronomical day into 100 equal parts, or koku, each subdivided into 100 ban. The two small openings visible in the lower part of the dial almost certainly served to display the date according to a sexagesimal calendar.

The case resembles that of a shaku-doki clock. The open front door of the trunk must carry the vertical hour scale depicted to the left of the clock. This vertical scale consists of ten divisions containing two subdivisions of five koku each. In addition, there are thirteen rectangular hour plates engraved with Japanese numerals, from 9 to 4 twice, which can slide up and down.

“To convert the number given by the pendulum clock at any instant to the true solar time, the number indicated on the pendulum at the instant of the sun’s transit which was observed most recently, and the number of oscillations of the pendulum during a solar day determined by the transit observations for several days of some fixed stars and the sun, were taken as the basis of calculation, and assuming that the clock made a uniform motion each day and night, the true solar time for the desired instant was computed by simple proportion”.

No date of manufacture is known, but it was produced during a period when modern timekeeping and planetary relationships were unknown. 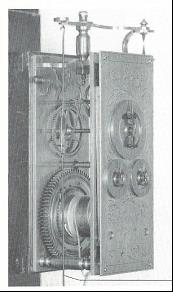 This clock was unearthed in 1963 in a Tokyo curios shop by Chester Howard a US NAWCC member working in Japan. What followed the discovery was a concerted effort by members of the NAWCC Tokyo Chapter to successfully acquire the clock and for it to remain in Japan. A very formal ceremony was then held the following Japan Time Day, 10 June, to receiving this donation into the Omi Jingu Shrine.

It is described as ‘a three inch principal dial with outer seconds ring and inner minutes ring, a subsidiary dial below for hours and a further dial and an aperture, all set on an engraved rectangular brass plate signed Shoshin Komaki in Japanese characters, the weight driven movement with double crown wheel escapement and side mounted pendulum, silk-suspended from one end of a shaped bar supported by a turned post traversing the movement, the other end supporting a plumb line weight, the reverse of the movement engraved with Japanese characters partially translated to read used at the temple Injoji. Kenryu, the chief priest of the temple bought this clock in the autumn of Keiou 1 (1865) in Edo period, with a possibly associated wisteria wood pillar case with adjustable hour and half hour markers down the front and containing a large striking movement with count-wheel cut for Japanese hours and providing the driving weight for the timepiece, key drawer in the base’.

Another timekeeper described by Shibukawa Kagesuke is much more intriguing than the above. Its movement had only two wheels; a main wheel carrying the barrel and an escape wheel. The escape wheel consists of two crown wheels attached back to back, the teeth of one being offset with respect to the teeth of the other by about half the width of a tooth.

The escapement is most original, if not unique. It consists of the double-crown wheel and a vertically set two-arm fork. Each arm of the fork carries a small rounded pallet at its end. These pallets would alternately lock, and then receive impulse and escape from the front and rear crown wheels; that is, the features are those of a frictional rest or dead-beat escapement.

The escapement fork is connected to a pendulum crutch that swings back and forth on a horizontal plane on the left-hand side of the movement. The pendulum suspension seen in the figure may have imparted to the pendulum a back-and-forth swinging motion in a single vertical plane, doing away with the expected rotatory or twisting motion transmitted from the escapement. However, the whole escapement must have had tremendous friction.

This timepiece has an artistically cut, florally engraved front plate provided with a single calendar opening and two decimal dials, which probably allow the day to be divided into a thousand equal parts. The hands must be directly attached to the wheel arbors, since the dial notations indicate that they rotate in opposite directions.

The clock stands on a simple pedestal, and the weight is a replica of that of the clock above. Vertically mounted on the stand, behind the weight, is a sort of cylinder made out of thirteen rods. Each rod is marked with a set of divisions for the unequal hours for a given time of the year, and together the rods provide a year- round unequal-hour scale, which could be partially rotated every fortnight. The presence of this scale indicates that the two-wheel train is not just a short-duration astronomical timer, but a twenty-four-hour timepiece.

No written records about the performance of these clocks exist in Japan, but they may have been accurate to between ten and more than 100 seconds per day, according to F. Ward’s diagram. The distinguished geographer Tadakata Ino used a timekeeper similar to the one illustrated, and the accuracy of his maps suggests that it performed well enough to properly determine differences in the longitude of several places within the Japanese archipelago.