As with timekeeping throughout the rest of the world, one has to go far back in history to understand the timekeeping system which was adapted to Japanese wadokei.

The world’s timekeeping originated in Babylonia before 4,000 BC.  It later spread west to the Egyptians, Greeks, Romans and beyond, and east to the Indians, Chinese and Japanese. The Babylonians first measured hours with a simple stick in the ground, which they later developed with a gnomon (upright) inside a scalloped stone.  The shadow of the gnomon was cast against a scale that divided the day into 6 or 12 daylight hours – there being no night-time shadows!   Night hours were determined by stars or the moon. This system was based on the length of day from dawn to dusk and was later to be known as “Temporal Time”.

The animal names given to the twelve hours of Japanese Temporal Time were based on the principles of Buddha (563 BC – 483BC) and came to Japan from India via China.  The animals were placed in the same order in which Buddha observed them under the Bho tree in his twelve years of meditation. The order of the twelve animals was also used to count the years and the seasons and eventually adopted for other spiritual beliefs, including being related to the celestial Zodiac (which originally they were not).

Timekeeping in Japan started with primitive sun dials on which time was measured by a gnomon that cast a shadow on the ground.  At night knotted ropes were burned to measure time.  Later, ‘fuel’ clocks of oil, candle and incense were used.

Incense clocks were in existence for many centuries, both before wadokei and throughout the Edo Period.  They were operated by Shinto priests in the various temples and shrines throughout Japan.

The incense clock consisted of a large box containing a layer of ash.  A wooden stencil was placed over one quarter of the ash.  Incense powder was then poured through this stencil to form a pattern corresponding to six measurable hours. This process was repeated on the three remaining quarters to form a complete swastica trail.  “Hour flags” were then placed along the trail, depending on the season.  Time was measured by the passage of the burning incense past each flag.  These clocks were far from accurate. The incense would burn inconsistently, affected by draughts and the quality of the incense, which was not always uniform.

A novel adaptation was that the scent of the incense could be different for each “hour” and the time of day and night could be measured by the scent from the burning incense.

Photograph: One of two incense clocks in the author’s collection.

Introduction of Time in Japan 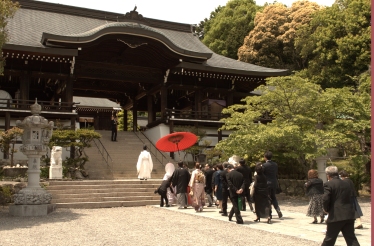 The time system in Japan is recorded as being initiated on the Japanese date equivalent of 25 April 671.  By the present solar calendar this date was 10 June; the present Japanese commemoration day known as “Time Day”.  A water clock was constructed and installed in the Imperial Palace in Otsu. The time bell and drum marked the hours in accordance with this water clock, enabling people to know the time.

In order to prevent the water freezing and the clock stopping in winter, a heating device was incorporated into the design. This clock operated until the Tenji Period (A.D. 1124 – 1156), but has not survived. Another record tells of a Water Clock invented by a Buddhist priest in the Yeikyu era (A.D. 1115 -1118). Some other Water Clocks were invented and used in the year of Taiji (A.D. 1126 – 1131) but (ironically) were destroyed by fire!  From then until late in the Muromachi period (1337 to 1573), when a mechanical clock was introduced from abroad, the time system of Japan depended solely upon these clocks. 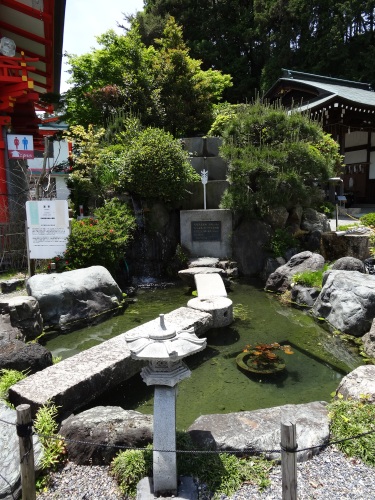 Through enthusiastic efforts by believers nationwide, the reconstruction of the Omi Shrine was completed in 1940. The Shrine also has a museum (left). It houses excavated articles closely related to the Capital of Otsu, and exhibits a vast variety of materials which give a historical account of the development of clocks.  Exhibited in the outer garden of the museum are: a water clock contributed by Omega, Switzerland (right), plus a fire clock in the shape of a dragon donated by Rolex, a precision sundial, and other items.